Home › Knowledge and Insight › Who's afraid of bond vigilantes?

Who's afraid of bond vigilantes?

Raising rates too soon would be a bigger threat.

Benchmark US government bond yields have been rising in anticipation of the end of lockdown unleashing a tsunami of pent-up consumer demand, powered by a fresh $1.9 trillion stimulus package. Concerns that this will lead to a persistent rise in inflation brought the ‘bond vigilantes’ out in force, pushing 10-year Treasury yields above 1.60% for the first time since December 2019.

As most states have relaxed lockdowns and continue vaccinating their citizens apace, attention has been turning to just how powerful the rebound in economic growth could be. The Fed is in a delicate position: it doesn’t want to put the brakes on the recovery, yet it has to be careful about adding fuel to an economy that may already be running hot. Keeping rates low and lending easy could encourage more borrowing and spending, increasing the amount of money in circulation and pushing inflation higher.

The impact on equity markets

A policy mistake by the Fed could have serious consequences for bond and equity investors. The impact of rising yields on equity markets depends on the speed with which they increase. Our analysis suggests that rising short-term rates matter more for equities than rising long-term (for example, 10-year) yields. In other words, so-called bond vigilantes are not the scourge of equity investors so much as central banks tightening rates too far. Indeed, shorted-dated market rates (indicating market expectations of where interest rates are headed) have actually fallen in the year to date, while the US benchmark S&P 500 has continued its climb to new all-time highs.

Furthermore, our analysis shows that 12-month forward returns for equity markets since 1970 have tended to be positive in periods of rising 10-year bond yields. And even over a range of time periods, higher daily equity market returns were associated with increases in 10-year bond yields (figure 1). That seems logical, given that periods of economic growth would also tend to be accompanied by rising long-dated yields.

Amid the steadily rising bond yields and the quickly recovering American economy, the US Fed chose to do nothing at its March meeting, as widely expected. It reiterated its plan to keep the Fed Funds interest rate between 0% and 0.25% because of concerns about squeezing any economic recovery by prematurely increasing borrowing costs for governments, businesses and households. Fed Chair Jay Powell went as far as to say that short-term interest rates should stay where they are until at least 2024. That’s a big call. Three years is a long time, and we’ve seen how quickly these forecasts can change. Yet the sentiment is stark: the Fed wants to keep loose reins on the US recovery for as long as it possibly can.

This path is possible as long as inflation doesn’t get out of control. It seems likely that people will want to make up for lost time after a year of house arrest. Yet it will depend on whether they feel safe to get out and spend — both financially and physically — and whether they have the ability to do so. The coming spike in inflation should prove transitory, in our opinion, because there are many stronger, longer-lasting economic trends that are keeping a lid on inflation (these are explained in greater depth in our recent InvestmentUpdate on inflation).

Fed Chair Jay Powell went as far as to say that short-term interest rates should stay where they are until at least 2024. The sentiment is stark: the Fed wants to keep loose reins on the US recovery for as long as it possibly can.

Higher interest rates hurt many ‘growth’ companies’ share prices disproportionately, since more of their value comes from the higher profits they are expected to earn far in the future, which are now discounted into today’s price at a higher rate.  But interest rates are being pushed higher because of greater forecast economic growth and moderately higher inflation. That’s not exactly a bad message.

In short, it’s not rising yields themselves that can be negative for equity markets, but the reasons why they are rising. If yields are rising because of improving prospects for growth and diminishing prospects of disinflationary pressures, equities are likely to rise. If yields are rising because the market expects the central bank to tighten monetary policy beyond what the economy can bear — or be forced into such a tightening by spiralling inflation — then equities may struggle.

For all the talk of runaway inflation, it is important to note that market expectations of long-term inflation are no higher today than they were at the start of the year. The Fed committee that makes interest rate decisions are unanimous in the view that it’s likely to be years before inflation and unemployment conditions are back to a level that meets their criteria for raising rates (figure 2).

As for 10-year yields, we think the central bank would allow them to continue to rise. By year end, 2% would be consistent with a number of analytical frameworks as well as the Fed’s long-term guidance. But we don’t think it is likely to tolerate another significant rise in real, or inflation-adjusted, yields.

Bond market investors may be coming around to our way of thinking: the 10-year treasury yield is more or less unchanged since mid-March.

What are the risks?

The key risk to this sanguine view would be a surprising upward spiral in inflationary pressure — a sustained rise well above 3%. Our analysis suggests equities would struggle on a sustained rise in inflation towards 4%, but that would depend on whether GDP growth stays low. We don’t think this is likely, but there is uncertainty and we will be looking out for signs of:

The Fed committee that makes interest rate decisions are unanimous in the view that it’s likely to be years before inflation and unemployment conditions are back to a level that meets their criteria for raising rates.

From last summer, we felt it made sense to start tilting away from the more expensive end of the equity market — i.e. defensive growth companies that have benefited most from the pandemic — and introduce some higher-quality stocks in areas that stand to benefit from a broader economic recovery (cyclical sectors). These higher-quality cyclicals tend to sit halfway between growth and value (the latter dominated by bombed-out cyclical shares whose prospects rest solely on the COVID recovery).

Yields could well continue to rise along with inflation over the next few months, and, as noted above, that is likely to weigh on growth companies. Still, we don’t think it makes sense to chase the recent enthusiasm for COVID reopening stocks. Although the better-quality cyclicals we favour are no longer trading on discounts, we don’t think this will stop them from delivering good returns for a lower level of risk as recovery continues. 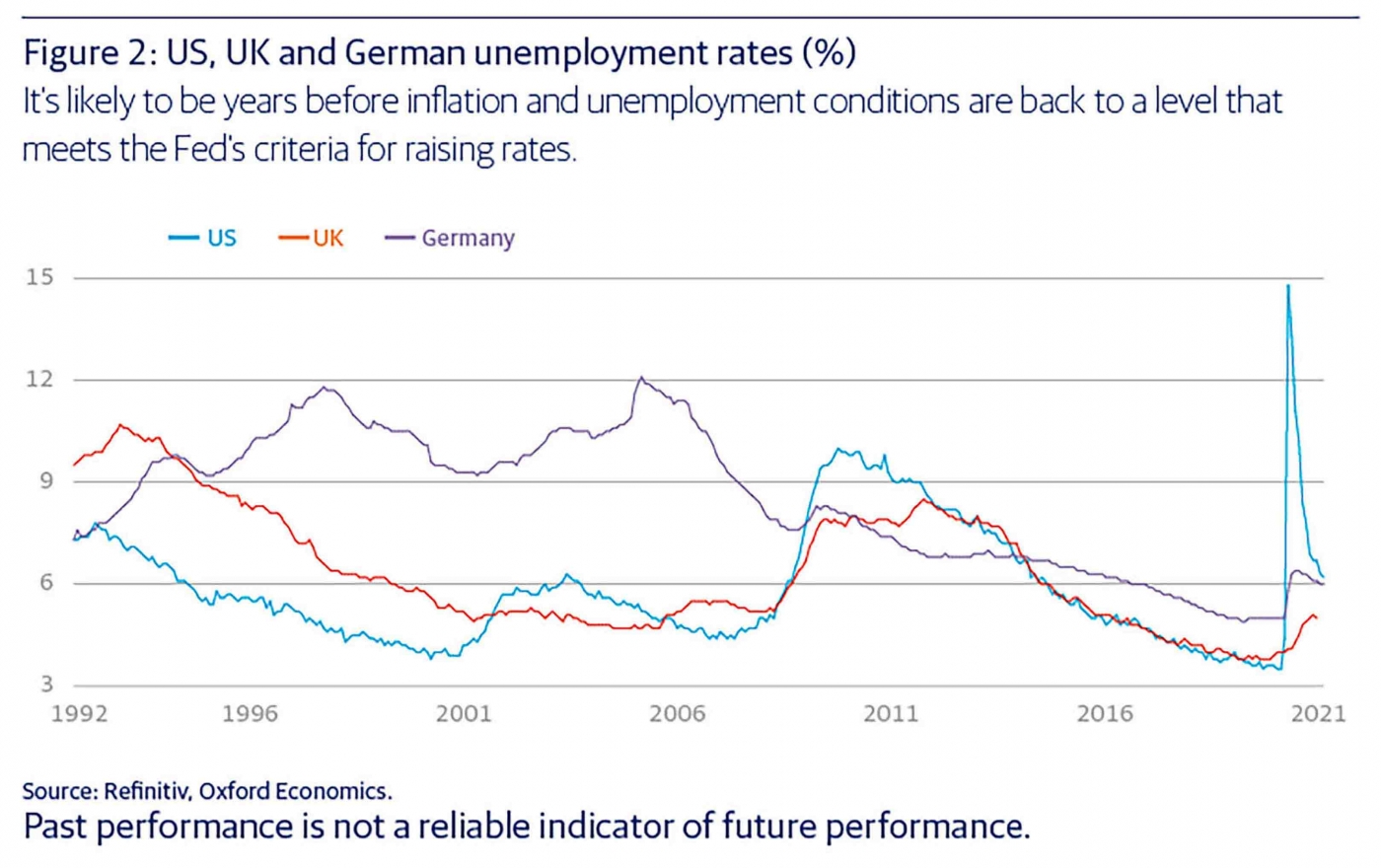 This article has been taken from, 'Q2 2021 Investment Insights', read the full publication here.