Home › Knowledge and Insight › Planet Papers 6: Cities to the rescue

Planet Papers 6: Cities to the rescue

Why our planet needs them to survive Back to Planet Papers hub

Though it may not seem like it, given the urgent and incessant news bombardment of the internet age, the world has lived through an extraordinary run of abundance in the past few decades. The rapid modernisation of developing nations, increasing globalisation and a brisk pace of technological progress led to a surge in the productive capacity of the world. In short, more stuff could be made quicker and cheaper than ever before. Fewer trade barriers allowed these cheaper toys, tools and appliances to be sold all over the world, boosting the buying power of hundreds of millions of people.

Urbanisation has been a pivotal driver of this progress. Cities and towns are where people meet to live, laugh and hatch plans for future greatness. Yet there is another, equally important, factor that has supported this boon: cheap and plentiful energy. And it has dramatically altered how we design our towns and cities, making them more diffuse, less dynamic and more energy inefficient.

It is as much a shame as it is a truth: crude oil is the bedrock of our modern society. Without it, our economies and our societies would disintegrate. Oil is in virtually everything manmade that we touch. It is used to grease the machines that make our goods, if not in the goods themselves (plastics). It is especially ubiquitous in transportation: the 20th century was the age of the motor car. And not much has yet changed in the 21st century either. Technological breakthroughs made petrol and diesel ever cheaper to extract and refine, and more efficient to convert into energy. But while that has lowered oil usage per head, the world is using 50% more oil now than we were in 1980 and 25% more than in 2000. This is unsustainable.

We’ve managed to harness different, more sustainable technologies and use them to reduce our reliance on finite and damaging carbon–based energy. But to complete this journey, we need to significantly reduce our energy consumption as well. That’s where we believe cities and towns can again drive progress. Smarter urban planning that allows for more walking, cycling and better public transport could massively reduce energy usage and rejuvenate our centres into the bargain. It could make us happier too. 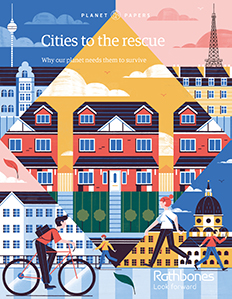 In this session we explore which cities across the world are taking the greenest initiatives and showing the most promise. In the aftermath of COVID19 we see new patterns of work and commuting.

Back to Planet Papers hub