Home › Knowledge and Insight › Looking for the ‘stag’ in stagflation

Looking for the ‘stag’ in stagflation

Inflation is high but the pace of economic growth isn’t stagnating. 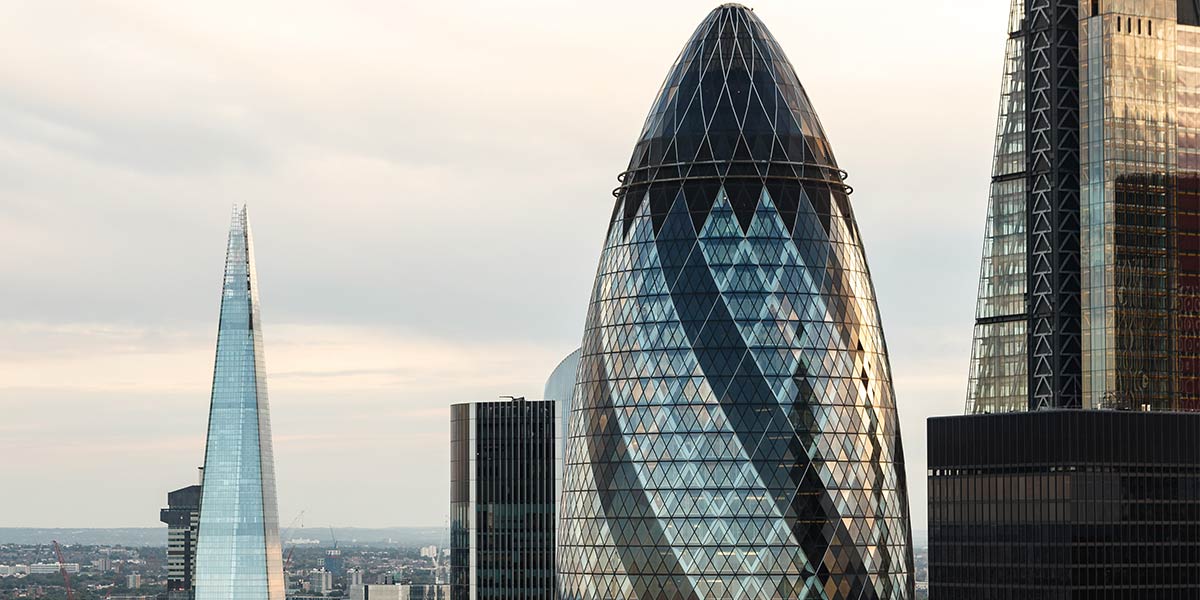 Global equity and bond markets had a bumpy end to 2021 as investors began to fear the worst of both worlds — stagnating output and persistently rising inflation, that nasty combination called stagflation. While we do think inflation will begin to fall back from the spring, there is considerable uncertainty around its outlook. However, fears of stagnating growth look overdone.

We see encouraging signs for equity investors in purchasing managers indices (PMIs) of global business activity and other leading economic indicators. In general, they remain strong and consistent with continued momentum in company earnings growth. These indicators are moderating from their extreme highs as economies initially roared back to life from pandemic-related shutdowns. But we are a long way from stagnating growth, much less a contraction.

As the post-COVID recovery enters its next phase of expansion, we think business investment is likely to be a driving force. Both in the US and worldwide there is evidence of a strong pick-up in business capital spending (capex) plans. As well as preventing stagnation, this factor is also likely to ease inflationary pressures.

More and better tools lead to enhanced productivity growth; better productivity puts downward pressure on unit labour costs; and unit labour costs tend to correlate with core inflation (figure 1). Minutes from the November meeting by the US Federal Reserve (Fed) also noted anecdotal evidence of the increased use of automation by many businesses in the face of ongoing labour market shortages.

Equity investors can also appeal to history for some level of comfort. Profit margins nearly always expand during periods of economic growth (with sales going up by more than costs). In addition, since the turn of the last century, profit growth has only failed to beat inflation during the great depression of the 1930s and in 1910. 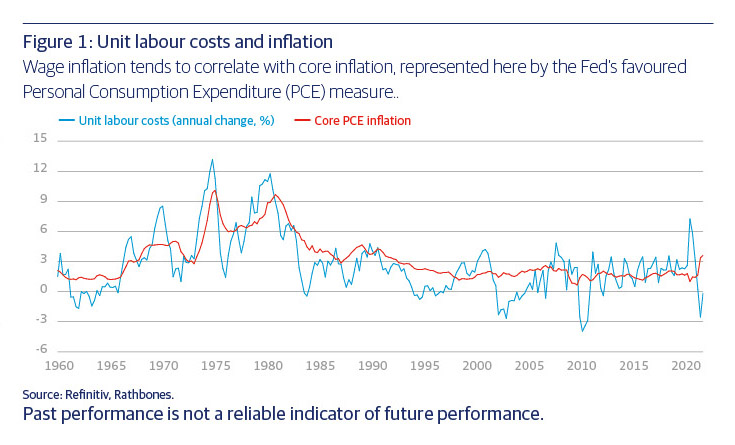 Looking for the right signal

When the yield curve flattened in late in 2021 (financial market shorthand for a narrowing difference between the yields on longer versus shorter-dated US Treasury bonds) some investors  cited this as a reason to be negative. That’s because it’s seen as signalling rate rises in the short term and slowing growth further down the line. However, a flattening yield curve is not on its own cause for alarm, and in any case this recent flattening has been somewhat unwound into the new year as longer-dated bond yields have risen sharply.

The relationship between yield curves and the business cycle — or GDP growth or stock market returns, for that matter — is not linear. After the yield curve flattened over the summer, an argument was floated along the following lines —the yield curve is flattening, it may invert next. While an inverted curve (when longer-dated yields fall below short-dated yields) tends to be associated with impending recession (figure 2), that doesn’t mean that a flattening but still upwardly sloping yield curve denotes a sub-par environment that should cause investors concern.

Since the relationship is not a linear one, many analysts (including us) transform the signal sent by the yield curve into a probability of recession using what we call a non-linear model. Even in September, after a summer of flattening, the yield curve still suggested a 0% chance of recession according to this model.

In fact, because yield curves start to flatten mid-cycle, a recent study in the Journal of Investment Management (JoIM) found that flattening is actually associated with a more stable growth environment -— that’s good news for investors, not bad.

Another crucial lesson to heed is that the window between inversion and recession tends to be long, 14 to 15 months on average, and has been getting longer with time. This makes it harder for investors to use the yield curve as a signal, as equity markets only lead recessions by three to six months. Selling equities as soon as the curve inverts could cause you to miss out on rising stock prices for rather a long time, let alone selling them when the curve starts to flatten. 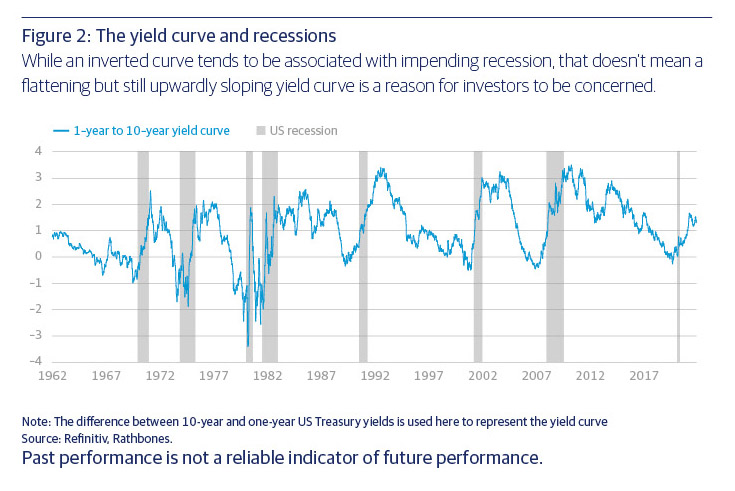 The big worry for 2022 is the potential trade-off between growth and inflation, for a corollary of 2021’s growth bonanza has been steeply rising prices, as we’ve noted in this quarter’s Investment Update publication and related videos. US inflation has reached a four-decade high — UK inflation is likely to also reach multi-decade highs in the spring — and there is an unusually wide fan of possible outcomes from here for investors to be alert to.

High inflation in consumer goods is unlikely to fully pass over to high inflation in services as spending normalises. Our base case is for global inflation to fade meaningfully from the spring, but to remain elevated until at least 2023. Much depends, however, on a resumption of normal spending patterns, which could be stalled by Omicron.

Central bankers have been clear that there is little they can do to stem the unique causes of today’s inflation, but that they are more mindful to tighten policy as output and employment are strong. Rising rates would ordinarily be a headwind to valuations, but markets are already pricing for a substantial number of rate hikes in the US, UK and Europe. Both the Bank of England and the Fed made surprisingly hawkish changes to policy in December and bond and equity markets were unperturbed, though volatility has gone up in the new year as hawkish rhetoric from Fed officials has increased and expectations for rate increases have growth with it.

Keeping an eye on earnings

Still, our relative optimism shouldn’t lead us to be complacent about the many challenges facing investors in the year ahead — after the blistering gains in equity markets coming out of the worst of the pandemic, it’s likely to be a difficult year by comparison. One major challenge will be to work out where the next leg of growth is going to come from, while also navigating the supply chain and labour market disruptions and government debt burdens that the pandemic is leaving in its wake.

We would be cautious about having any significant bias toward a particular style, especially highly valued ‘growth’ companies or ‘cyclical’ shares that are more sensitive to broader economic conditions. Both of these could come under pressure if bond yields resume their rise or the economy stutters. There has been relatively little differentiation between these and other investment styles this year, which is typical in the middle of the economic cycle when the initial spurt of growth has peaked.

In the article ‘The quality and visibility of company profits are what matter’ on page 6, we explore more about why we think a ‘bottom-up’ focus on companies with persistent momentum in generating good-quality, growing profits makes sense, irrespective of styles. Strong earnings momentum can be found in both value and growth, cyclicality and defensiveness, and these more ‘top-down’ macro factors are likely to be a less relevant source of differentiation.

In the US and other major markets, average earnings continued their streak of comfortably beating expectations in the third quarter (the latest set of full results), though guidance on future earnings was more cautious than expected. Supply chain disruptions and labour supply shortages could also continue to weigh on profit margins and need to be watched carefully on a case-by-case basis. Still, though caution in the face of uncertainty is warranted, the bar for earnings expectations in 2022 may now be set sufficiently low to limit the risk of disappointment.

This article has been taken from, 'Q1 2022 Investment Insights', read the full publication here.