Home › Knowledge and Insight › Review of the week: The Queen’s people

Review of the week: The Queen’s people

Hundreds of thousands of people queued for hours to pay their respects to the late Queen ahead of her funeral on Monday. 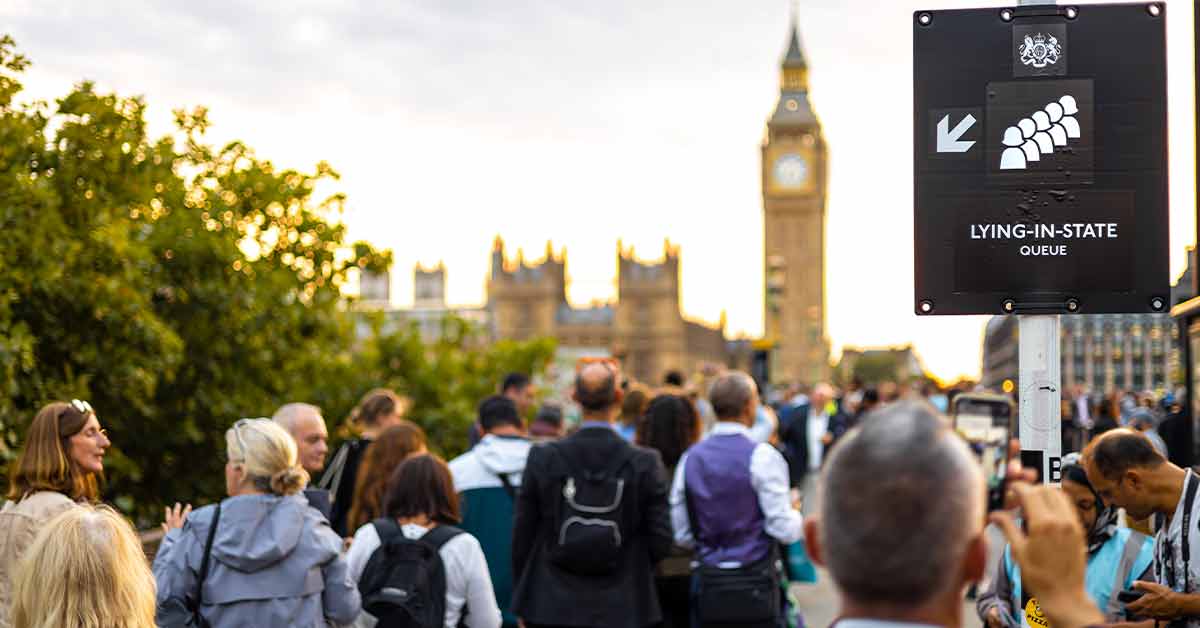 For all the faultless marching, resplendent uniforms and colours, and soaring choirs and gothic arches, perhaps the greatest tribute to the late Queen Elizabeth II was the queue of people who stood in line for hours to see her lie in state.

A great river of people, 10 miles at its longest, with waits of more than 24 hours. Why wait all that time only to slip past the coffin in less than a minute? With an unerringly British instinct, hundreds of thousands of people came to the conclusion that the queue itself said it all: how long can we make it? The larger the queue got, the more people were encouraged to join it. It was a tribute. An echo of the long lines of people the late Queen had met, congratulated, thanked and waved to in her lifetime.

There were celebrities passing cold nights next to ordinary folk, people were sharing food and blankets and looking out for people they had met only hours before. That sense of community was heartening to see, especially as the coming winter is shaping up to be tough.

Following the end of the mourning period, this week is a busy one for UK politics. Energy prices have been capped by government, but prices are still more than double where they were before the pandemic. Inflation is running at 10%, bond yields – the government’s cost of borrowing – keep edging higher. The benchmark 10-year UK Treasury bond yield, at 3.20%, is at its highest level since 2011. UK Retail sales fell massively in August. They dropped 1.6% from July, the biggest monthly decrease this year, and they were 5.4% lower than a year ago. New Chancellor Kwasi Kwarteng will deliver an emergency mini-budget on Friday, where he is tipped to reverse the recent hike in national insurance levies and maybe even bring forward to 2023 a 1% cut in income tax planned for 2024 by his predecessor, Rishi Sunak.

Before Kwarteng speaks, however, the Bank of England (BoE) will make its interest rate announcement on Thursday. A 50-basis-point increase to the current 1.75% Bank Rate is the minimum expected. There is a very good chance that the bank will instead hike rates by 0.75%, taking the benchmark rate to 2.50%. Such a move would be a powerful signal to investors, businesses and households that the BoE is serious about tamping down inflation. It would also squeeze homeowners and the indebted considerably.

The US Federal Reserve (Fed) will also reveal changes to its monetary policy this week. The yield on benchmark US 10-year Treasury bonds rose above 3.50% for the first time since early 2011 as investors increasingly expected another heavy rate increase from the world’s most powerful central bank.

An increase of at least 75bps is expected for Wednesday, which would take the Fed Funds Rate to the band between 3.00% and 3.25%. At the start of the year, the rate was 0% to 0.25%. It has been a phenomenally quick rise in borrowing costs. There’s an outside chance that the Fed will even raise rates by a full percentage point. While American headline CPI has dropped back from 9.1% to 8.3% in the last couple of months (helped by lessened petrol prices), core inflation has reaccelerated from 5.9% to 6.3%. Core inflation removes more-volatile food and energy costs, giving a clearer picture of the underlying trend in prices for goods and services.

Depending on which consumer confidence survey you look at, Americans are either catatonic or upbeat about the future. Looking instead at what people do rather than what they say, there’s still a lot of money flowing to retailers in the US today. August sales were 9% higher than a year earlier. The resurgence of core inflation shows the continued strength abounding in the US, despite roaring inflation and stuttering stock markets. Job security is still very high in America.

How long this can last in the face of a Fed determined to break inflation, is the question investors are asking themselves. The tick-up in core inflation – and the expected consequences on the Fed’s monetary policy – sent stock markets tumbling by more than 4% last week. It was the largest one-day fall since June 2020. Stability is unlikely until US inflation is trending steadily and decisively downwards.