Home › Knowledge and Insight › Rathbones’ Ed Smith: US mid-terms – What does it mean politically and what is the impact on markets?

Rathbones’ Ed Smith: US mid-terms – What does it mean politically and what is the impact on markets? 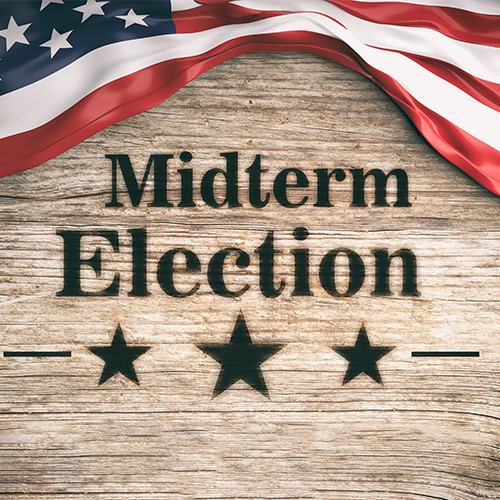 The final votes are still being counted but it’s clear that the Democrats have won control of the House while the Republicans have extended their majority in the Senate. If this midterm election was a referendum on Mr Trump’s presidency, the results were inconclusive. In fact the Republicans lost fewer seats in the House than the historic relationship between a President’s approval rating and his party’s performance in the midterms would have predicted (see chart): it looks like the Republicans have lost around 35 seats but Trump’s approval rating suggested the loss should have been more like 40. The Democrats were always likely to face an uphill battle in the Senate: while all 435 seats were up for election in the House, only 35 were up in the Senate, 26 of them belong to Democrat incumbents! Of those 26, 12 had a significant chance of swinging to the Grand Old Party (GOP), but only six seats held by Republican incumbents had a chance of swinging to the Democrats.

What does this mean politically?

Without a House majority, Trump’s legislative agenda is dead in the water – basically most things which involve government expenditure and revenue. So possibly no further tax cuts, no big cuts to Medicaid or food stamps, no further repeal of Obamacare. US governments rarely reverse the previous one’s tax changes outright. We don’t expect a significant change in the size of the budget deficit, but at least a small redistribution away from the very wealthiest beneficiaries of Mr Trump’s tax plan seems inevitable.

The Democrats flipped the House by picking off suburban Republican incumbents with centrist candidates. As the results became clear, House Minority leader Nany Pelosi (now the Majority leader, although she may step down) said her priorities were lowering drug prices and building better infrastructure. These fit with the Republican agenda too, and Pelosi said she wants to work with the Republicans not against them. However, the House are in charge of starting investigative and disciplinary proceedings against Mr Trump and his appointments. Expect a lot of this over the next two years – it could drive some market volatility. But impeachment is a red herring. The party bringing the impeachment proceeding needs both a House majority and a supermajority in the Senate.

Mr Trump only requires Senate, not House, approval for judicial or cabinet appointees. The big risk is that Mr Trump, hamstrung on Capitol Hill and unable to enact the remaining legislative policies on his to do list may now focus all of his attention on the one thing for which he doesn’t require Congressional approval: stoking the trade war.

Now to be clear, there just aren’t enough data points to draw firm conclusions from the historic performance around midterm results. In other words, this time may be different (heaven forbid). But let’s be careful not to overestimate the magnitude of the impact on financial markets and, in particular, equity sectors, now that the Democrats have retaken the House. Investors may just be glad to get back to studying earnings reports and economic releases. After all, the third year of a President’s term has delivered the most consistently positive returns.

Analysing the last 50 years, we find evidence that US equities tend to be rather directionless in the six months before a midterm election (much like this year), with a little extra volatility (again, much like this year). Over the subsequent six, equities tend to rise steadily (see chart). But here’s the rub: it doesn’t seem to matter one jot whether or not either party loses, gains, keeps or never had control of Congress in the first place.

2006 was the one incidence of a Republican president losing control of both chambers in Congress – the S&P 500 still went up. We plotted the market reaction to five midterms when a Republican President controlled neither chamber – before or after the election – and the general pattern is still there. The idea pushed by some commentators that Democrats in Congress is bad for business is not supported by equity market performance.

We found no evidence that midterms alter the path of US equities relative to global equities. The dollar doesn’t appear to deviate from the path it was already set on and there’s no pattern to dollar performance and which party does well, poorly or indifferently.

We’ve dug into sector performance too and again no pattern emerges. Defence, healthcare and banking corporations are businesses that operate in politically sensitive environments, but the midterms don’t appear to make an impact. The defence sector, for example, underperformed the broader market after the Republicans retained control of Congress in 2002; it outperformed a touch when the Republicans lost control of Congress in 2006.  Given that there is bipartisan support for lowering drug prices and improving infrastructure, we expect to see this impact related stocks.