Since forever, global investors have been extremely wary of inflation in emerging markets. But the economic effects of the pandemic were so unprecedented that many developing nations have been able to take potentially inflationary emergency measures without being punished by investors (figure 3). Some emerging market central banks have even managed the previously unthinkable — quantitative easing (QE) — and still inflation expectations have generally stayed anchored. This could be a paradigm shift for the developing world.

The reason fixed income investors are more sensitive to inflation than stock market investors is right there in the name. A company can raise prices and increase their profits in line with higher inflation, so stock prices tend to hold their value when inflation rises (except in periods of runaway inflation). But when you have signed up to receive a fixed income — set coupons each year and your capital back at the end of the bond’s term — any deterioration in the value of those payments (inflation) comes straight out of your pocket.

During the initial pandemic sell-off, investors ran the typical playbook. As the dollar jumped relative to developing currencies, money rushed out of emerging bond markets. But investors have returned much quicker than during past crises, helping most emerging market bonds recover, near enough, to their pre-pandemic levels. Currencies have recovered too, yet remain lower than before the crisis.

"This bond market resilience has kept a lid on the borrowing costs for developing governments, allowing them to issue more debt in order to increase government spending to cushion the impact of the pandemic on their economies."

This bond market resilience has kept a lid on the borrowing costs for developing governments, allowing them to issue more debt in order to increase government spending to cushion the impact of the pandemic on their economies. In the past, bond investors have been much too flighty for emerging economies to embark on this ‘countercyclical’ spending in a downturn. In advanced economies, countercyclical spending is a standard response to recession, as it helps reduce the slump in GDP and eases the financial strain on people and businesses.

It’s unclear exactly why investors are disregarding inflationary risks in emerging markets today. Certainly, the risk appears to have receded all over the world, driven by ageing demographics, the cost-cutting nature of technological progress and the effect of greater savings piles. Another reason is that many emerging market central banks took a lead from their developed world counterparts and stepped in as buyers of last resort during the initial sell-offs. Essentially a short-term QE programme, this would have been unthinkable even 12 months ago. It made it easier to sell emerging market bonds, potentially soothing fears that investors would be stuck with bonds nobody wanted.

Emerging markets’ debts, relative to the size of their economies, have increased modestly because of greater government spending and falling tax revenues. Yet nowhere near the degree seen in the developed world. The spending is still substantial, however, so it should reduce the depth of GDP falls that would otherwise be the case. Emerging markets should also benefit from the extraordinary amount of money pumped into global markets by the Fed, European Central Bank and Bank of Japan. As yields fall in developed markets, more investors are pushed into riskier assets — such as emerging markets — in order to achieve their required returns.

So is emerging market debt less risky? In some ways, investors have already anointed the market less risky by not fleeing as they would have in the past. But as we pointed out, part of that is due to the distortions of central banks. There are still a lot of risks in emerging markets due to their generally less stable institutions, governance and currencies. Yet if they really have got inflation under control, they are now able to use countercyclical spending in downturns, meaning they should grow more smoothly. That would be good for investors as well as the emerging nations themselves. 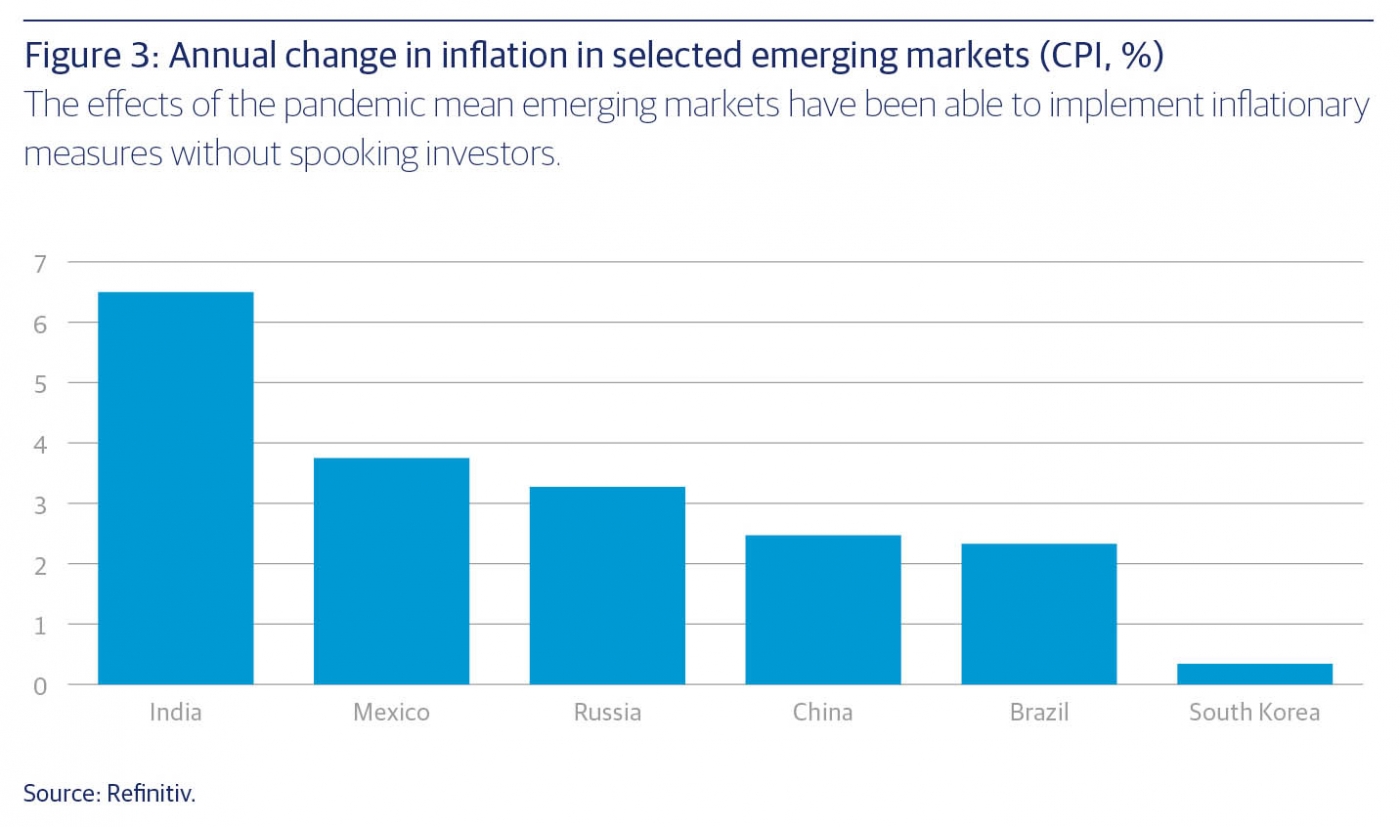 This article has been taken from, 'Q4 2020 Investment Insights', read the full publication here.